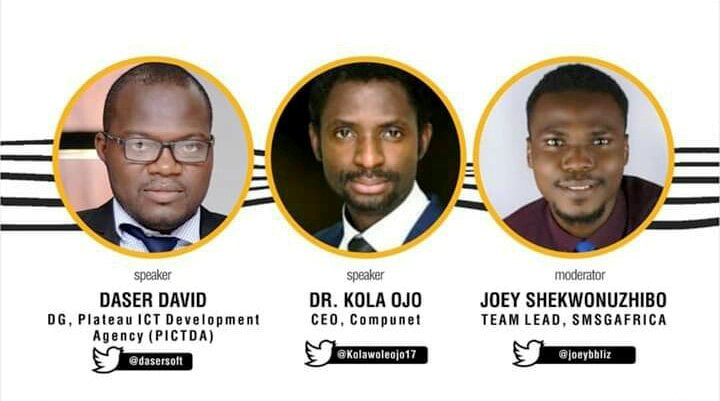 The chat with the theme: “Are we ready for the Digital Future” was moderated by Mr. Joey Shekwonuzhibo with two speakers: the Director General of the Plateau ICT Development Agency (PICTDA), Mr. Daser David, and CEO of Compunet, Dr. Kola Ojo.

The speakers agreed that a digital future was crucial to social and political cohesion as well as driving economic development. But government and all citizens have a harmonious role to ensure Nigeria’s entry into the knowledge economy.

In the narrower sense, digital future is the idea that all businesses will operate digitally in the future. But in the broader sense, it also implies that government with governance is public-centric business which also must be driven digitally to make public institutions more impactful on government.

This raises the questions of how to ensure broadband internet access for all, close digital gaps between rural and urban centres, break data barriers among all institutions – whether public and private, and bring digital platforms to impact on everyone.

David, who has the task to lead PICTDA to drive Plateau State’s digital goals, delved into the role of government in the digital future of the state.

He said Plateau State government is trying to see what works and also discussing with key stakeholders on how to drive a blueprint for the state’s digital future.

Daser mentioned that citizens can drive relevant policies and government must be deliberate in the nation’s digital future so we can attract investment to Plateau state.

“Our collective partnership online will determine how support will come from Google and other digital giants and for that to be done the government is trying to set up tech hubs in the local governments,” said David while citing an example with Lagos and how Former Governor, Babatunde Raji Fashola gave free right of way to MainOne which has helped to transform Yaba into one of Africa’s biggest technology hubs.

Daser agreed that government must lead the way in setting the policy and infrastructure framework for a digital future and must come with a document of intent. But he said citizens too have a role to incite government to do the needful and set it on the right course as was the case in Lagos.

Ojoalso complained of sharing false or deliberately exaggerating negative narratives. He told participants of how people outside Jos picture Jos as a war zone because of what residents of Jos post online.

“We are not telling our stories on the Plateau, we need to tell our stories that will do us a lot of good,” said Ojoalso while urging participants to help promote Plateau in the positive light on social media to encourage investors into the state.

“We have not maximized the power of technology in Nigeria, and only one-third of the registered bank accounts in Nigeria appreciate mobile banking. This is one of the setbacks we have as a country,” added Ojoalso.

Stories on social media decide the perception of how outsiders view the state and whether it is worth investors’ attention, the speakers concluded.

The SMSGAfrica fireside chat is organised by Tomruk iHub Multiverse with the collaboration of Lagos based Knowhow Media and Market Intelligence International Limited (KMMIIL), publishers of IT Edge News.