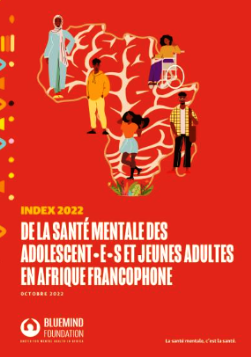 According to the United Nations Children’s Fund (UNICEF), every day, nearly 20 teenagers commit suicide on the African continent. Suicide is the third leading cause of death among 15-29 year olds1 , knowing that nearly 37 million teenagers (aged 10-19) live with a mental disorder in Africa2. An alarming situation when we know that by 2050, 40% of young people in the world will live in Africa3.

In this context, the Bluemind Foundation publishes the first mental health index of adolescents and young adults in french speaking Africa. Based on a field survey of 929 teenagers and young adults in Cameroon (Douala, Yaoundé, Dschang, Bafoussam, Garoua, Maroua), Côte d’Ivoire (Abidjan) and Togo (Lomé), the Index teaches us that:

“The prevalence of mental health disorders among our generation portends two things: a difficulty for society to properly address the subject of mental health with its most vulnerable population (young people) and an urgent call for doing better. But, to do better, you have to know what problem to address, how to address it, and what the end beneficiaries expect. It is precisely an answer to these questions that this index provides”, said Martin Lingom, Program Manager of the Bluemind Foundation’s Teen Youth Tank.

“The findings of this Index confirm that it is urgent to mobilize for the mental health of young people in Africa, proposing today sustainable solutions for the adults of tomorrow. An invitation to implementing a global multisectoral strategy so that this alarming situation does not remain ignored and neglected. At the same time, Africa has hope, a hope that rests on its youth, a youth unfortunately sick. It is a citizenship issue that engages the responsibility of all of us. Will we collectively be up to the challenge?” concludes Marie-Alix de Putter, Founding President of the Bluemind Foundation.

To download the mental health index of adolescents and young adults in french speaking Africa and discover all the results: it’s here