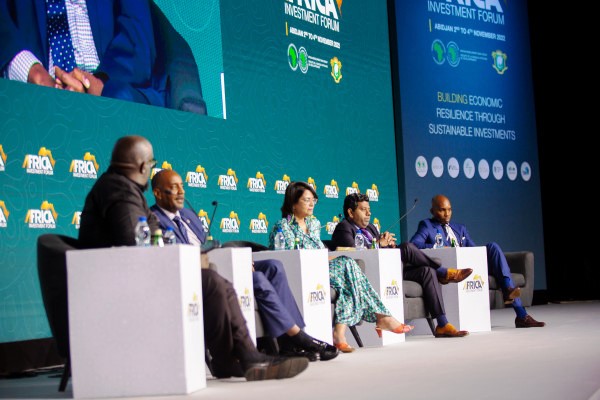 Africa is facing external shocks that negatively impact its growth and socioeconomic development. The Covid-19 pandemic has compromised the sustained growth that the continent has enjoyed for the last 25 years, and the Russian-Ukraine war is threatening populations with a severe food crisis.

Other speakers were Admassu Tadesse, President of the Eastern and Southern Africa Trade and Development Bank; Rajakumari Jandhyala, President of YAATRA Ventures (a platform offering investors a specific approach for deploying capital in energy, infrastructure and added-value opportunities in Africa and emerging markets); Mohan Vivekanandan, Director of the Development Bank of Southern Africa; and Bernard Ayitée, President and Director General of Obara Capital (an investment fund offering solutions and alternative financing to enterprises and African countries).

Africa’s potential in the world economy is growing. Most of its population is young people; a quarter of the world’s population is likely to live in Africa between now and 2050, and the African Free Trade Zone is making progress. Nearly two-thirds (65%) of unused arable land is found in Africa, which is also rich in minerals (including cobalt, lithium that are essential for producing batters, and Africa is the world leader in such agricultural products as cacao, coffee, cotton, essential oils, mahogany).

Minister Diarrassouba emphasized Africa’s relatively low production costs: “Africa is the world’s most profitable region, according to the OECD.  Investors from the continent and elsewhere ought to seize its enormous investment opportunities”.

Benedict Oramah called on African countries to redouble their efforts to make the free-trade zone fully operational so that Africa no longer lags behind other regions in regional integration.

He said certain transaction costs had already dropped since the agreement took effect and urged countries to develop their value chains in productive sectors, including agriculture, mines, and energy. Mene also announced the Third Inter-African Trade Fair this November in Abidjan.

The session outlined ways the continent can take advantage of ambitious trade policies and innovations in financial services to facilitate capital flows toward development projects. Delegates pointed to the significant progress banking institutions have made in infrastructure investment.

“We can be hopeful. The levels of collaboration and co-financing are high,” Tadesse said, citing investments in gas projects in Mozambique and thermal energy in Tanzania.

YAATRA Ventures gave the example of its investments in energy security in Uganda, emphasizing that African investors’ perception of risk differs from that of Western investors.

Panelists agreed that if African financial institutions have a fundamental role to play for long-term investors in the continent, it’s up to the African countries to create an environment that is promising for attracting national and international investors.