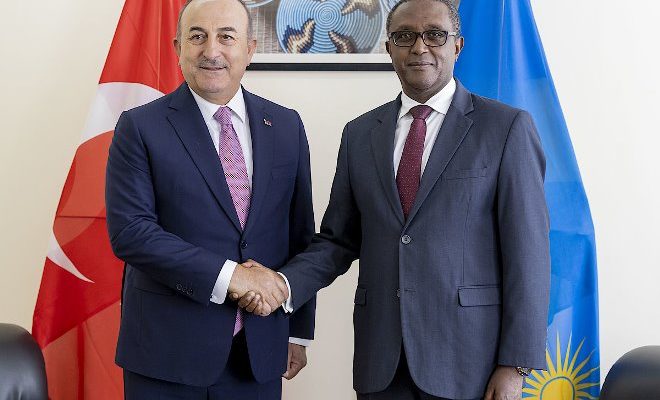 Three new agreements have been signed in General Cooperation, Culture, as well as Science, Technology and Innovation.

The visit of Minister Çavuçoglu follows Minister Biruta’s visit to Ankara in September 2021, during which Rwanda and Türkiye signed cooperation agreements in the areas of sports, education, industry and protocol, to give a new boost to the existing relations between the two countries.

“The visit of Minister Mevlüt Çavuçoglu to Rwanda is a strong signal to further strengthen the existing bilateral relations. lt also offered an opportunity to discuss new areas of cooperation for benefit of citizens of both countries”, said Minister Biruta.

Three new agreements have been signed in General Cooperation, Culture, as well as Science, Technology and Innovation.

This visit was also an occasion for Minister Çavuçoglu to pay tribute to the victims of the 1994 Genocide against the Tutsi at the Kigali Genocide Memorial. He also met with other Government officials and visited the Amahoro Stadium renovation site.

Rwanda and Türkiye enjoy diplomatic relations since 1980 and opened diplomatic missions in Ankara and Kigali in 2013 and 2014, respectively.