PLEASE IF YOU ARE NOT USED TO HANDLING “INCONVENIENT EMPIRICAL TRUTHS” DO NOT READ BEYOND HERE FOR THE SAKE OF YOUR EMOTIONAL COMFORT:

I lament your situation. In the past fifty years, Nigerians have built millions of churches and mosques . They have trained thousands more imams and pastors. They have more million copies of the Bible and Quran now compared to 1960. They pray more per hour now than in 1960 when many were “pagans.” There are more revival meetings per week in order to help maintain focus on doing God’s will now, than in 1960. . They send more people to Mecca and Jerusalem in order to instill God’s fear in the human heart, which should in turn have impact on human character, relationship, culture and institutions.

But go to the most Christian state and the most Muslim state (population wise) in Nigeria today and ask: is there more fear of God today in public morality and personal interaction than fifty years ago? Guess the answer you will get: Nope. I know this is hard for the average Nigerian to acknowledge. But I am not talking about what someone wants to feel, but the empirical reality.

I had one driver from Jos, who is a Christian and he was driving me to Bauchi, a nearby state. I engaged him in a conversation as I usually do with ordinary Nigerians in the form of their life history, given that I enjoy doing social researcher. At one point the driver made this profound observation on his own — he told me that, the pagans of the past in Nigeria are more God fearing than today’s Muslims and Christians. He is right. I grew up in a town where as I was attending elementary school there were many people that Muslims and Christians call “pagans.” But there was more fear of God then in the town than now when everyone is either Christian or Muslim. So what is really happening. Note that when Amos scolded the Northern Kingdom, there was a lot of religion going on there too. So too much religious ritual in a country is not necessary a reflection of true worship of God.

This whole idea that there is a religion that can save Nigeria from her social problems is not supported by empirical evidence I am sorry to say. I know this is also hard for the average Nigerian to absorb. Religion has extravagantly expanded in Nigeria in the past 50 years, but public morality, even in the church and the mosque, has deteriorated, instead of being elevated. So if the religion of the future is the same as that of the past fifty years, historical judgement is bitter for any honest Nigerian i.e., that religion has expanded in the country but it has had little positive impact in elevating morality and ethics form where it was fifty years ago.

If anyone is in doubt of my observation, let him or her negotiate with the leaders of his or her church or mosque to give us clearance to conduct investigative research about the role of the church and mosque in public morality in their community. If religious people incarnate the true ethics of their religion that are geared towards promoting human dignity, as the pietistic tradition in church history suggests, they would not have to preach or waste time engaging in distant pontificating, because their lived lives will be a reprimand for those who do the wrong thing. For instance, the word “Christian” was used to describe people with a distinctive life style in the culture from others in Antioch.

At the current rate, unless someone is going to demonstrate a special way in which the kind of religion that will be practiced in the future in Nigeria will be systematically and substantially different from what was practiced in the past fifty years, we have no hope because we have seen religion phenomenally expand and penetrate the culture of Nigeria but with little impact on personal honesty or public morality. Actually, there has been deterioration of public morality and ethics.

The irony is that for those that care to study religion globally and are courageous to admit the inconvenient truth, there are countries in the world that are considered “pagan” by Nigerian Christians and Muslims and yet such countries are better governed and better ordered than Nigeria, where God is everywhere but also hard to be found. Indeed, the God of the Nigerians never bless them with wisdom and ingenuity to manufacture even a Nokia phone. Nigerians do not feel ashamed that they are religious people, one of the most religious people in the world but their religion never gives them wisdom to care for the poor and the ordinary persons among them, or manufacture what they need. How can such a country with resources have over 50% living in poverty. A country like Rwanda that went through genocide has better human development indicators in many areas than Nigeria.

Go to Abuja, the federal capital of Nigeria, and see imported products. Indeed, the God and religion in Nigeria fails to give people wisdom to supply electricity regularly whether in the most Christian or Muslim state. If religious ethics is serious, it must penetrate day to day undertakings. This is what Weber called “The Protestant Ethic.” Think about that. Look at the facts. Nigerians go and order things from countries in Asia that they consider”unsaved or pagan” and then flaunt what they ordered in their places of worship or on the streets. Monotheistic religions claim to be superior to all other faith traditions, but the evidence in Nigeria compared to other countries suggest, you can be a monotheistic country and claim “you” only have the truth when statistically speaking, it is better to be a cow in Europe than to be a kind of human being in Nigeria. Why?

Because the EU subsidize cows owned by farmers minimum of $2:50 per day under the common agricultural policy of the union. In Nigeria, millions do not make $2 per day but they flaunt their religion everywhere.

As Fanon said in his chapter titled “The pitfalls of national consciousness” in his book “The Wretched of the Earth” the postcolonial African bourgeoisie is satisfied to consume the products of western creativity and innovation without bothering to think how the products were produced in the West so that they can produced it themselves.

Given what we know about what the Holy Books of Islam and Christianity said about their impact on human character and public morality, we have every reason to stand firm and say that there is something wrong with the practice of both religions in Nigeria because they do not produce the results that their Holy Books promised will happen when they are practiced. Or is the current moral and ethical decay in Nigeria what the two religions promise will happen when they expand and penetrate the culture and in this case for fifty years?

The two faiths have expanded but public morality has declined. You can resolve this huge moral and ethical failure by passing laws against the sin of a small group “homosexuals” while ignoring corrupt elites, adulterers and fornicators, as if God is silent about those types of sins. Do not cherry pick sins from the Holy Books that make you feel good.

Nigerians are living in pain now, but the country was not destroyed by people from out of out of space. It was destroyed by people who by their acts of commission or omission worship in Churches and Mosques regularly, i.e..it is because of of moral and ethical duplicity. Even some ordinary citizens can be held accountable for supporting corrupt leadership or being gullible.
No nation has developed by doing the wrong thing on day to day basis while praying for miracle on the other hand. Actually that approach to change is full of hypocrisy.

Go to the most Christian and Islamic state in the Nigerian federation and investigate this utmost contradiction between high degree of religiosity and moral and ethical decline, and the story is the same: There is no New Jerusalem or a Dar es Salaam in Nigeria. For many ordinary Nigerians life is struggle with no sign of light at the end of the tunnel. If one predominantly Christian state can turn itself into a New Jerusalem, or one predominantly Muslim state can turn itself into a Dar es Salaam by the people’s acts of upholding genuine ethics and morality that will be acknowledged by all, and will be a reprimand to others, this will amount to a paradigm shift in Nigeria. Indeed that will be far better testimony than distant pontification. I have seen Nigeria now for many decades from my birth and there is increased decline in public morality in all religions and levels of society, while religion is thriving in terms of its public demonstration of rituals. I lament this. 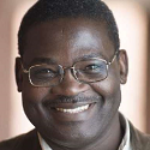 Samuel Zalanga
Samuel Zalanga is a Professor of Sociology at Bethel University, St. Paul, Minnesota, United States where he currently teaches Sociology of Development among other fields. Before moving to the United States in 1993 to pursue graduate studies, he lived and taught in Bauchi State, Northeastern Nigeria. He completed his Bachelor’s and Master’s degrees in Sociology at Bayero University, Kano, and University of Jos, respectively in Northern Nigeria.