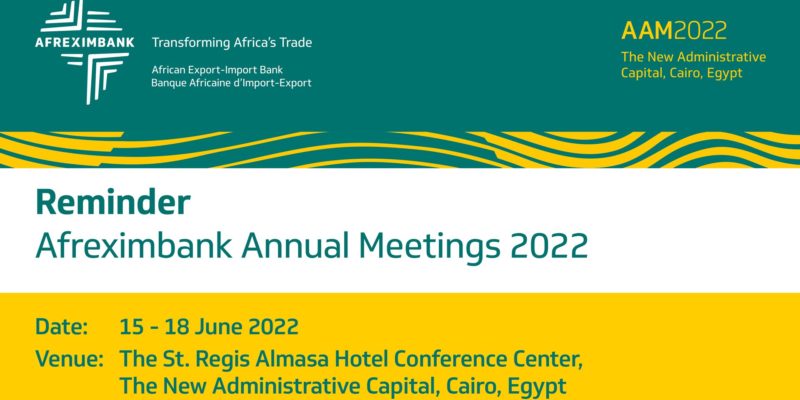 “Africa’s problems are for Africans to solve,” Professor Benedict Oramah, President and Chairman of the Board of Directors of African Export-Import Bank (Afreximbank), told participants at the start of the 29th Afreximbank Annual Meetings (AAM2022) in Cairo.

In an opening statement at the St. Regis Alamsa Convention Centre in Egypt’s New Administration Capital, Prof. Oramah said that Afreximbank had intervened to help the continent implement African solutions during challenging times, some with the support of other development partners and African institutions.

He asserted that, with the creation of the African Vaccine Trust (AVAT), which enabled African Union (AU) member states to procure 400 million doses of the Johnson and Johnson COVID-19 vaccine for the fight against the spread of the COVID-19 pandemic through the AU’s Africa Vaccine Acquisition Task Team (AVATT), the notion that Africa cannot rise again had been debunked.

“We stand on the pedestal of the work done here to say that we can if we dare,” said President Oramah.

He complimented the resilience of the continent during the challenging times brought about by the Covid 19 pandemic, saying that positive stories emanating from particular countries like Egypt, which had invested over 62 billion US Dollars over the past six years in massive infrastructural transformation, were a manifestation of the continent’s ability to achieve whatever it desired for its people.

“Notwithstanding the increased frequency of crises, we must not lose sight of the fundamental challenges that Africa must resolve. We can no longer accept that after 60 years of independence, Africa remains financially and economically fragmented. We can no longer continue to espouse the benefits of an integrated continent but do little to achieve it,” said Prof. Oramah.

On the ongoing Ukraine crisis, Prof. Oramah appreciated the new challenges posed to Africa, including difficulties in accessing grains, fertilisers and petroleum products, and noted that Afreximbank had stepped in with the 4 billion US dollar Ukraine Crisis Adjustment Trade Finance Programme for Africa (UKAFPA) to help countries to contain the short-term impacts of the crisis.

He appealed for increased commitment to the Bank by its shareholders, saying that a stronger Afreximbank could be one of the solid pillars on which Africa’s development could be built.

Prof. Oramah announced that, by 2021, Afreximbank, through its Intra-African Trade Division, had disbursed about 20 billion US dollars in support of intra-African trade and investments, with plans to disburse a further 40 billion US dollars during the next five years. That had raised the intra-African trade share of the Bank’s portfolio from 3% in 2016 to about 27% in 2021 and had enabled African contractors to bid for African infrastructure-related projects.

AAM2022, which runs through Saturday 18 June 2022, is being held under the theme ‘Realizing the AfCFTA Potential in the Post-Covid-19 Era by Leveraging the Power of the Youth’.

Sessions will include the meetings of the Advisory Group on Trade Finance and Export Development in Africa and the Annual General Meeting of Shareholders of the Bank, complemented by a full programme of seminars and plenaries featuring insights from senior government ministers, senior executives of international and continental organisations and authorities, captains of industry, and leading economists, amongst others.

The meetings are being attended by business and political leaders, banking industry professionals, trade and trade finance practitioners and other parties involved in economic development from across Africa and beyond. The Meetings have been ranked among the most important gatherings of economic decision makers in Africa.

The Fragile North and the Power Shift Dilemma