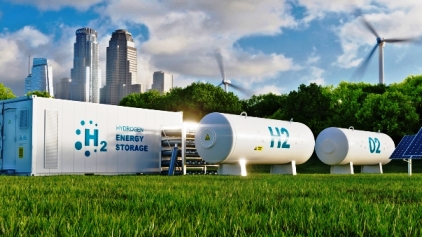 Harnessing Africa’s solar energy to produce 50 million tons of green hydrogen a year by 2035 can help secure global energy supply, create jobs, decarbonize heavy industry, enhance global competitiveness and transform access to clean water and sustainable energy. The analysis has been commissioned by the European Investment Bank, the International Solar Alliance and the African Union, with the support of the Government of Mauritania, HyDeal and UCLG Africa,

“Africa’s has the best solar energy in the world and transforming solar power into green hydrogen can strengthen energy security, cut emissions and pollution and decarbonise industry and transport. The European Investment Bank is working with partners across Africa and around the world to harness its renewable energy potential to produce low-cost green hydrogen at scale. The Africa’s Extraordinary Green Hydrogen Potential report shows concrete opportunities to transform access to green energy and clean water across the continent and beyond.” said Abdessalam Ould Mohamed Salah, Minister of Energy of the Republic of Mauritania,

“Africa has the best renewable energy in the world and scaling up production of green hydrogen can transform access to low-cost electricity and clean water. Unlocking Africa’s green hydrogen potential will require close cooperation between public, private and financial partners. The new “Africa’s Extraordinary Green Hydrogen Potential” study outlines what can be achieved and what needs to be done. The European Investment Bank is pleased to work with African and international partners to enable large scale green hydrogen to become a reality.” said Ambroise Fayolle, Vice President of the European Investment Bank.

“Solar photovoltaic technology has provided us with the cheapest electricity. It will cost below €2 per kg in several African countries by 2030, much lower than the current mass assumption of €5 and a stark contrast to the $60-70 paid for an oil barrel. Thanks to this low-cost electricity and decreasing electrolyser costs, the next step is providing access to a clean fuel, cheaper than all the current fossil fuels. It will enable us to decarbonise the power sector and most hard-to-abate sectors – fertilisers, steel manufacturing, and refineries.” said Dr Ajay Mathur, Director General, International Solar Alliance.

“As the global energy and climate crises unfold, mass-scale competitive green hydrogen is ready to provide energy security, affordability and decarbonization. Integrated hydrogen hubs bringing together upstream, midstream and upstream players on the basis of long-term off-take contracts are building powerful business models. Pioneering African countries such as Mauritania are showing the way, proving that Africa can help the world with green hydrogen – ensuring for itself a future of industrial development, fast and clean growth for all” says Thierry Lepercq, President of HyDeal.

The report was formally handed over to partners on December 20th.

The comprehensive analysis carried out in recent weeks by international consultancy CVA suggests that large scale green hydrogen investment can accelerate decarbonisation by enabling large scale African energy users, such as fertilizer and steel producers, to use green hydrogen. The research is enhanced by CVA’s unique strategic partnership with energy partners across Africa, Europe and around the world.

The study highlights that solar powers green hydrogen is economically viable and can be produced at less than EUR 2 per kilogramme, cheaper than traditional fossil fuel energy, and cater both for local energy demand and allow green hydrogen to be exported to global markets. This is equivalent to energy costs of USD 60 a barrel.

The research suggests three requirements to enable 50 million tons of green hydrogen to be produced in Africa by 2035:

The new study outlines how production and transmission of green hydrogen can lead to a EUR 1-trillion investment yielding 7 exajoules of energy (versus a consumption in Africa of 19.9 exajoules in 2021) and a correlative massive increase in GDP, creating hundreds of thousands of permanent and skilled jobs across Africa.

The new analysis estimates that green hydrogen investment could reduce carbon emissions in Africa by 40%, replacing 500 million tons of CO2 a year.

Enabling Africa to be a global green hydrogen powerhouse

According to the study large scale green hydrogen generation will enable Africa to supply 25 million tons of green hydrogen to global energy markets, equivalent to 15% of current gas used in the European Union.

The new analysis will be followed by in-depth research of local green hydrogen investment potential, regulatory requirements and changing demand in the coming months

The European Investment Bank (EIB) is the long-term lending institution of the European Union owned by its Member States. It makes long-term finance available for sound investment in order to contribute towards EU policy goals.

The International Solar Alliance (ISA) is an alliance of 121 signatory countries based in Gurugram (India) dedicated to fostering the development of solar energy with a specific focus on the developing world, to help address energy security and climate change.

HyDeal is the initiator of HyDeal España, a joint venture between solar development, gas transmission, steel and fertilizer companies, building Europe’s largest integrated green hydrogen hub. It is based on market-based off-take contracts of 6.6 million tons of hydrogen over 20 years in Northern Spain, with production starting in 2025. HyDeal is also collaborating with the Government of Mauritania on the development of mass-scale green hydrogen infrastructures.

How FOREX impacts trade in Nigeria