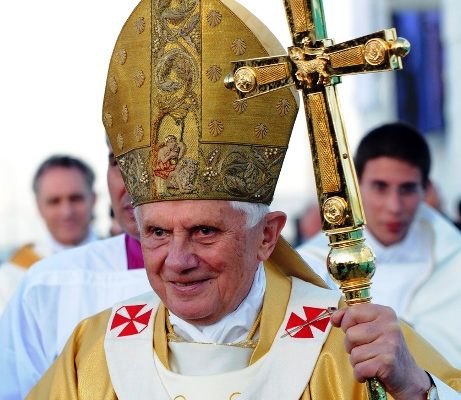 On January 26, 1998, I authored an article, entitled ‘Lessons from the Dead’, in one of Nigeria’s foremost newspapers. In the piece, I attempted to eulogize the late Mother Theresa of Calcutta for her avowed commitment to the advancement of global development as well as her giving an everlasting face of honour to humanity. As a member of staff of the Catholic Secretariat of Nigeria (CSN) later that year, I came to a striking realization that ‘Catholics are made, not born!’

As a writer and public affairs commentator and, much later, as a leading member of the production crew of ‘CSN News’, the official newsmagazine of the administrative headquarters of the Catholic Church in Nigeria, yours sincerely was able to read widely in a bid to know more about the Church and its leaders. Joseph Cardinal Ratzinger, then, Prefect of the Congregation for the Doctrine of the Faith, was one of them. In 2002, I had a once-in-a-lifetime opportunity of visiting the Cathedral Church of Our Dear Lady (Frauenkirche), Munich, Germany, which served as Ratzinger’s seat as Archbishop of Munich and Freising, between 1977 and 1982.

Indeed, one of the attributes of the Catholic Church is its ability to train its people. Well, the Church believes that one should always be at the top of one’s game. That’s why the institutional prowess of the Catholic Church is unparalleled all over the world. It is also the reason an institution like that can raise a pope like Benedict XVI. The Church is supportive of its members and adherents of the faith. It is also pro-intellectual like no other Church; and it is wealthy enough to see its projects through anywhere on Planet Earth. That’s why we seldom have a wishy-washy man becoming pope.

The Catholic Church must actually be commended for the selection process of popes because enormous responsibility is placed on it to ensure that the right candidate is chosen. Ideally, the Church can afford no error! Ceteris paribus, it has fared better! So, raising a brilliant, charismatic and resourceful priest like Pope Emeritus Benedict XVI is also a sign of the shrewdness of the process of the selection of popes.

To be sure, one of the shining attributes of leadership is an individual’s ability to thrive in untested waters – navigating roads that were hitherto never travelled and how specific leaders fared at the end of the day. Indeed, Pope Benedict has demonstrated to the world what the ideal profile should look like. He was a pragmatist; and, like former President J.F. Kennedy, the Bishop of Rome and Sovereign of the Vatican State understood the huge responsibilities of power and its functions.

Therefore, he would not stick to power for the sake of power. Instead, he carried power gingerly throughout his tenure. And, when it was time to let go, he didn’t need anybody to persuade him. He knew his health was failing and he decided to let go. Whereas other people would have been beating a wall with the hope of transforming it into a door, the pontiff opted for the path of honour. Even with the clergy in Africa, they wouldn’t have let go of that sweetness of power!

“In the African setting…. leaders don’t quit; they don’t resign; and they don’t retire…. courtesy of the alignment and accommodation found in the cultural contents of most African societies.”

When Benedict resigned as pope on February 11, 2013, the world was taken aback while some people felt it was rare and unheard-of. Indeed, in the preserved historic account of the Church, only one pope had attempted such; and did resign, hundreds of years ago. Pope Benedict lived above his peers! He glossed through life with abundant grace and vitality because he has an understanding of the intricate details of life and the inevitability of death.

Like King Hezekiah, whose resolutions were based on the convictions of his faith, the Holy Father was a man of uncommon courage and a sure symptom of manly tenderness who, until death, was developing. Unlike others, who’d never want to listen to the topic of death, Benedict XVI was able to speak truth to power and face any situation because he knew that he would be here only for a while; that he would one day take the exit route of life. And, by so doing – not living for the moment – he would surely live forever in the hearts of a lot of people.

Abraham Lincoln! Nelson Mandela! The tragic truth is that the world is fast losing its best with striking vengeance and opportunities for their replacement are waning with each passing day. Unfortunately, Africa is the worst hit! Therefore, welcome the African continent, where leadership positions are held in a ‘till-death-do-us-part’ fashion. In the African setting, it is considered normal for leaders to stay put in positions of power.

The point is: in our clime, leaders don’t quit; they don’t resign; and they don’t retire! Of course, they are not even supposed to leave, courtesy of the alignment and accommodation found in the cultural contents of most African societies. Unlike Giovanni Martinelli, the Apostolic Vicar of Tripoli who, despite repeated threats to his life, preferred martyrdom to betraying his community, the story of leadership in Africa has been one of unutterable desolation, indescribable poverty and wanton destruction of innocent lives.

Let’s face it: leadership in the African setting doesn’t have the same root in cultural foundation with the rest of the world. In a continent where people with neither decency nor honour dictate the pace of affairs; where conspicuous underachievement and struggle for power crudely compete for space; of course, where poverty increases with the same proportion as the national budget, why won’t times and things get messed up? That’s why you have a leader like Paul Biya and Yoweri Museveni who will not want to go after spending 40 and 37 years in office respectively.

Nigeria’s case is even peculiarly worse! Here, the society and the social structures are ambivalent; and successive leaders understand this! That’s why they can afford to mess up in public office while the society debates the pros and cons of the alleged misdemeanour. To get out of this doctrinal mess, the Cultural Revolution and new orientation will have to start from scratch; that is, from the youths. The youths need to learn that, when they are in a position, they should do for their country something great because everyone has an expiry date!

“Leadership in the African setting doesn’t have the same root in cultural foundation with the rest of the world….That’s why you have a leader like Paul Biya and Yoweri Museveni who will not want to go after spending 40 and 37 years in office respectively.”

Generally in Nigeria, the leadership and/or ownership structure and the preponderance of diverse denominations have actually divided the Church more than unite it. The personalization of the ownership of the churches for pecuniary conveniences has made cohesion and control of the Church a difficult venture. Take for instance, a General Overseer (G.O.) somewhere may say something to his or her members and the leader of another denomination may be opposed to it! It is this lack of cohesion amongst the denominations that has made it easier for the political ‘King Kongs’ and socioeconomic swallowers to factionalize the Church. If God is God and the same One, it is common logic that the doctrines coming from the denominations should not be different.

Undeniably, the Catholic Church and, indeed, the world, has lost a star; not only because the Successor to the Throne of Peter shined as a noble priest, but being someone who through his life and death has contributed significantly to the leadership and institutional attributes of the Church globally. May the generations of Pope Benedict XVI abound, even in the future!

May the Lamb of God, who takes away the sin of the world, rest the soul of our beloved Pope Benedict XVI and comfort the Church he left behind!